Lavazé plateau, who is more "biodiverse" than you?

There is a sprawling plant in Val di Fiemme. It is a carnivorous plant native to South Africa; the Drosera, commonly known as the sundews. It lives at an altitude of 1780 metres in the peat bogs of the Lavazé plateau.

No more than twenty centimetres tall, at first glance it seems to be coated in dew, because its leaves are covered with hairs ending with shiny, viscous drops. Insects have no chance of escape from these sticky tentacles. Once the prey is captured, the small leaf of the Drosera rolls up on itself like a Boa constrictor.

By carefully taking in the view during spring, you can admire this carnivore in the two peat bogs of the Lavazé plateau "Becco della Palua" and "La Torba", which - due to their proximity - have been merged into a single biotope. Among the 200 plus plant species of the biotope, the woolly filaments of the Eriophorum vaginatum also incite awe and amazement. Flower lovers will find a biodiverse garden on the Lavazé Plateau and if they head up the slopes of the Corno Nero and the Corno Bianco they will discover the floral essence of the Val di Fiemme.

These twin peaks, of different geological origins, contain a diverse variety of flowers which can be admired on the two sides of the Val di Fiemme. On the Corno Nero porphyry, there are numerous floral species found along the Lagorai Chain. The calcareous dolomite of the Corno Bianco reveals the flowers of the meadows which surround the Dolomitic massif peaks of the Latemar and the Pale di San Martino. These two opposing points, positioned to the west, evoke wonder due to both the vastness of the landscape and the chromatic details which can be admired whilst walking at a leisurely pace.
On the Corno Bianco the shaggy rhododendron with its characteristic hairy leaves blooms, whilst on the Corno Nero the ferruginous rhododendron with its shiny and hairless leaves blossoms, during the month of June. At the top of the Corno Bianco we encounter the edelweiss. Here the nose is seduced by the fragrant scent of the pink-violet Gymnadenia orchid and by two natural orchids which smell of vanilla and chocolate: the red Nigritella rubra and the Nigritella nigra, which is a dark orange colour. Between the vibrant glances of the feathered carnation plumes (Dianthus superbus), the elegant martagon Giglio (Lilium martagon) and the poisonous Veratro (Veratrum album), we are left incredulous, observing the striations created by seaweed fossils on the stones. They remind us that we are walking on the Dolomites, among flowering gardens emerging from the sea.

A walk that will live on in your memory through images, scents and flavours: 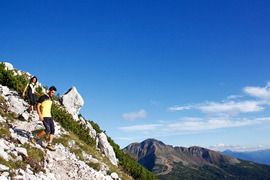